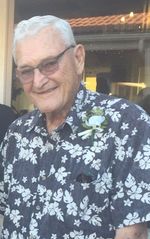 DONALD ‘POP’ DELANO CARTER passed away peacefully at his home in San Diego, CA on April 13, 2019 at 8:30pm at the age of 85 surrounded by his family after a short battle with cancer.

Don is survived by his loving wife of 66 years, Mary Alice (Reising) Carter. They were married in Evansville, Indiana on January 10, 1953.

Don was born in Evansville, Indiana in 1933. He graduated from Reitz Memorial High School (Evansville, Indiana) in 1950, where he played 2 years at Tackle in 1948-49 and gained honors as All-City and All-Conference. He attended Tulsa University in 1950 and 1951 before entering the Navy where he was placed on the All-Service team. He attended Evansville College in 1955-1956 and at that time served as Line Coach for Evansville College. Don also played professional football for the Ottawa Rough Riders in the Big Four Canadian League and the Chicago Cardinals. Don & Mary relocated to San Diego in 1958; Don then went on to a career in the Sporting Goods industry in San Diego, CA working at various companies and retiring from Berry’s Athletic Supply in Lemon Grove, CA servicing professional, college, high school and little league teams for over 40 years and retired in 1995.

Pop enjoyed wood-carving and was extremely talented; he loved telling his famous stories, eating and most of all spending time with his family. He was very well known in the San Diego community and loved by so many including close neighbors and friends. He will be missed by all.

The funeral mass will be held at Our Lady of Grace Catholic Church, 2766 Navajo Rd, El Cajon, CA 92020 on Friday, April 26 at 9:30am with Father Gino officiating. A reception will take place at the church hall immediately after mass. A private interment will follow at Singing Hills Memorial Park in El Cajon, CA for the immediate family.

In lieu of flowers, memorial donations may be made to: Kaiser Hospice Care – 10992 San Diego Mission Rd. San Diego, CA 92108 and reference Don Carter/Hospice in Memo OR Sisters of Saint Benedict – 802 East 10th St., Ferdinand, Indiana, 47532. Condolences for the family may be offered online at Featheringillmortuary.com or sent to the family’s home in San Diego.