To share your memory on the wall of Carl Hahn, sign in using one of the following options:

Provide comfort for the family of Carl Hahn with a meaningful gesture of sympathy.

Carl Richard Hahn was born in Milwaukee, Wisconsin on October 12, 1926 to Charles and Grace Hahn. In 1944, Carl enlisted in the United States Army and was deployed to the Philippines where he met and fell in love with J... Read More
In Loving Memory

Carl Richard Hahn was born in Milwaukee, Wisconsin on October 12, 1926 to Charles and Grace Hahn. In 1944, Carl enlisted in the United States Army and was deployed to the Philippines where he met and fell in love with Josefa Del Rosario. Carl and Josefa were married on June 22, 1946 and settled in Manila.

In 1950, Carl and his family moved to Milwaukee Wisconsin for better job opportunities. Carl worked multiple jobs, including for the Coca Cola Company, for AC Spark Plug, and also operated his own television-repair business. In 1962, Carl moved the family to Phoenix and was employed at Goodyear Aerospace (Loral) for almost 30 years.

After retiring at age 62 in 1989, Carl and Josefa moved to El Cajon, CA in 1990. They loved traveling the world, golfing, attending the theater, and taking trips to Las Vegas. But, most of all they loved spending time with their family and close friends.

Carl loved God, his family and friends. He loved telling jokes to make people laugh to lighten up their daily lives. During his life, he made many life-long friends because of his belief in fairness, discipline and willingness to share his knowledge. Carl found strength and purpose in his devotion to his wife of 72 years and the loving support of their 5 children, 8 grandchildren, and 9 great-grandchildren. On May 9, 2019, Carl Richard Hahn passed away suddenly of natural causes at the age of 92. He will be missed by everyone who knew him.

The family wishes to thank you most sincerely for your expressions of kindness and sympathy. God Bless You!

We encourage you to share your most beloved memories of Carl here, so that the family and other loved ones can always see it. You can upload cherished photographs, or share your favorite stories, and can even comment on those shared by others.

Posted Aug 18, 2019 at 07:34pm
Missing my Dad so much....He was the most caring and most grateful human being I ever knew. He was Always there for me, and all of my family, no matter what. He was my hero. He is with my son, Ryan now...and I know it was a happy reunion for them both. You are in my heart and on my mind every day. I love you dear Dad....I will always love you. I know we will all be together again someday....Francine

Posted Jun 09, 2019 at 01:15am
My name is Eddie Mylan and I was Carl's plumber.
Carl was a true friend of mine, he was always happy to see me, just as I was to see him. I have been a plumber for over thirty years and have met thousands of customers in that time. I can assure you that in all that time I have only kept in touch with a very few and recently Carl has been the only one to continue sending me emails. I moved to Australia about six years ago and everytime I get an email from him I could not wait to open it and see what he sent me and to read what it said. Sometimes funny and sometimes wisdom but I was always happy to see them and reply back. When I was still working in the San Diego area and was near to his home I would sometimes stop in just to say hi. Carl never called me a lot but when he did I would come right over even on the weekends. Most times it would be something small but I think more than anything he really just wanted to talk to me and listen to my stories. I would rarely charge him although he would insist, so I would let him pay me twenty dollars or so just so he didn't think he was taking advantage of me.
Once my son was doing a project for school about silent movies and I mentioned it to Carl while working on his kitchen faucet, a few days later I got a call from Carl and he asked me to come over, so I did. Carl had copied three or four silent movies for me to give my son for his school project...how sweet is that?
Like those old vacuum tubes up in his rafters that no longer glow, neither will his laugh and his smile, but I will always remember them.......... Farewell my friend.

Thank you for writing your sweet memories about my dad....He had mentioned you on occasion and he truly valued your friendship. My Dad enjoyed staying in touch with you over the years. Stay well and God Bless you...from his daughter, Francine.
EH

Posted Jun 02, 2019 at 08:28pm
I loved my grandpa for a lot of things. He was a good man and was very caring. One thing I took away from him is his interest in telecommunications. Which is an industry that I currently operate in. It's the main part of my business. I also look forward to getting my HM radio license, like he had. I remember his catalog for all of the movie he had on tape, Each tape had a number. Look through the catalog and find the title you wanted. Each title had a number, then find the number on the tape. Observing that as a kid, lead to my systematic organization practices. I will miss him.
Comment Share
Share via:
FH

Dear Erich, He loved you so much....Please let me know when you come to visit Grandma....would love to see you....Love, Aunt Francine
TF

The Winn Family purchased flowers for the family of Carl Hahn. Send Flowers

The Winn Family purchased flowers for the family of Carl Hahn. Send Flowers 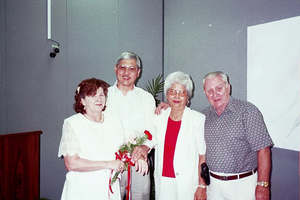 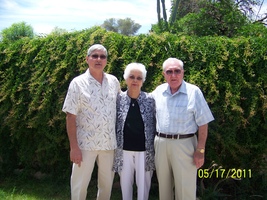