To share your memory on the wall of William Mallios, sign in using one of the following options:

Provide comfort for the family of William Mallios with a meaningful gesture of sympathy.

We encourage you to share your most beloved memories of William here, so that the family and other loved ones can always see it. You can upload cherished photographs, or share your favorite stories, and can even comment on those shared by others.

Dr. Mallios was a statistician, Senior Fulbright Specialist, and professor. He delighted in numbers, data, and prediction; Bill specialized in forecasting everything from stock market prices to sporting outcomes. He wrote multiple books on practical applications of statistics and predictive modeling during his professional career, the majority of which came out during his 28-year tenure as Professor of Decision Sciences at California State University Fresno.

Dr. Mallios traveled extensively during his professional career, never wavering from new challenges, research questions, or locales. After receiving his BS from Purdue University in 1957, Bill earned a PhD in Statistics from North Carolina State University in 1962. Over the next four decades, he was intricately involved in a wide variety of applied statistical projects. Dr. Mallios tracked polio vaccinations in Texas for the Center for Disease Control in the early 1960s, completed Department of Defense strategy, technology, and engineering contracts for Booz Allen Hamilton in Washington, D.C. and Los Angeles in the late 1960s and early ’70s, worked for the U.S. Food and Drug Administration in Washington, D.C. in the early 1970s, and took on government and defense contracts for Braddock, Dunn & McDonald in Monterey and Albuquerque during the late 1970s and early ’80s. Bill joined the faculty at Fresno State University in 1982. His applied international research blossomed in the early 1990s with the end of the Cold War and the dissolution of the former Soviet Union; for two decades, Dr. Mallios spearheaded multiple foreign projects and oversaw grant-driven projects in Hungary, Russia, Belarus, Azerbaijan, China, South Korea, Greece, Turkey, Cyprus, and Bulgaria. In 2011, he retired and moved to San Diego.

Bill is survived by his wife Ronna of 53 years, sons Peter (of Ellicott City, Maryland) and Seth (of San Diego, California), daughters-in-law Elizabeth and Gretchen, and grandchildren Gabby (12), Annabelle (12), Sam (11), and Benjy (9). Due to Bill’s unbridled love of physical fitness and gardening, the family asks that in lieu of flowers, you plant a tree or do some push-ups. 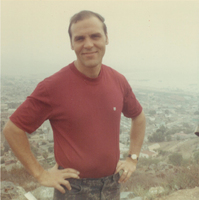