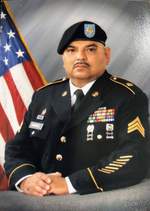 Richard Manuel Ramirez, 62 died on July 28, 2019. He lost his battle with brain cancer. He was born to Celia and Eduardo Ramirez. He was born in San Diego, CA in June 27,1957. Richard is survived by his sons Richard Jr, Christopher, Steven, Robert and Ernesto Ramirez, daughter Patricia Ramirez, step son Henry Raygoza, life companion Blanca Raygoza- Ramirez, His brother Eduardo D. Ramirez Jr, his sister’s Martha A. Rodarte and Maria T. Ramirez. and his grandchildren. He loved driving and serving his country.

He enlisted in the US Army in 1976 - 2009, worked as a former track and wheel mechanic and US Army solider until he retired in 2009. (he worked on trucks, tanks and helicopters. Guard and fulfilled solider duties)