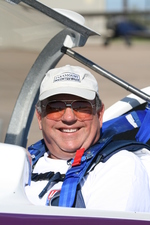 Jenner Knight passed away on August 16, 2019 following complications from surgery.

Jenner was born in San Diego, and graduated from San Diego State University. He began his 32 year distinguished career as an airline pilot with PSA in 1969, was promoted to captain, and retired from USAirways in 2001. Jenner was an outdoorsman and adventurer. He enjoyed whitewater rafting, hunting, fishing, and skiing. He had a passion for sailing and was a skilled aerobatic pilot, winning numerous awards. Jenner had an incredible sense of humor and brightened up any room he entered.

Jenner was buried, following a life well lived, on August 26, 2019 next to his parents, Jenner (Johnnie) and Mary Francis (Frankie) Knight at Greenwood Memorial Park.