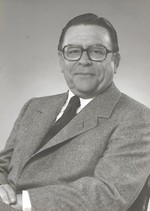 Udo ("Utz") was born and raised in Alameda, CA to Hemut & Ilsa Hinck, graduated from Alameda High and attended Heald Business College in nearby Oakland, CA. He then worked for hos father in the honey processing and resale business in surrounding Bay Area until WWll. Udo proudly served our nation in the far Eastern theater with the Army's 7th Infantry Division which was sent to the Aleutian Islands in Alaska,Hawaii, Philippines, & Korea. He married a former classmate from Heald and the love-of-his-life Mary Beth (Holland) in 1947 and together they raised their children, Cindy (DeRoos) of Oregon and Bill Hinck of San Diego. Udo was a top-notch salesman having worked for General Mills, M.Blackburn& Co., and Personal Products CO., a division of Johnson & Johnson. After retiring form J&J in 1981 he, opened and operated his own food brokerage business in La Mesa for another 12 years. He thoroughly enjoyed socializing with people and belonged to and was an active member/ leader of several groups over the years: Phi Lambda Fraternity, Elks Club as a 79 year old member, Free Mason at 32nd degree level, San Diego Grocer's Sales club of which he was president and co-founder, La Mesa Optimist Club, the local German Club, and was active on vestry of St. Dunstan's Episcopal Church. Udo also took great pleasure in volunteering at Grossmont Hospital. He died peacefully just 9 days short of his 101st birthday with his children at his side. He was lovingly cared for by Mission Hospice and the folks at Montera Retirement Living in La Mesa.

In Lieu of flowers, the family suggests donations to the St. Dunstan's Episcopal Church Memorial Fund.