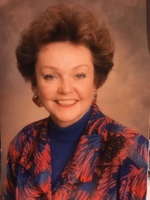 Dorothy (Dottie) Ellen Latus went peacefully to the Lord on September 3, 2019, just 3 weeks after her
91 st birthday. Dottie was born to Helen and Robert Stocker on August 11, 1928, and was raised in
Alhambra, California. She graduated from Alhambra High School and business school before working in
Los Angeles, where she met the love of her life, Charles (Chuck) Kevin Latus.
Chuck and Dottie married in 1950 at the United States Naval Academy in Annapolis, Maryland. Later,
they moved from Los Angeles to San Diego where they enjoyed a beautiful and loving life together with
their children, grandchildren, and great grandchildren. Dottie will be fondly remembered by her children
Susan and Robert Duron, Bill and Allison Latus, and Terri Lekos; her grandchildren Shawna and Michael
Krystek, Marissa Belcher, Corinne and Mike Lampman, Brandon and Makenzie Latus, Brian and Jenny
Latus, Justin Lekos, and Riley Lekos; and her great grandchildren Devyn, Tyler, and Jordyn Krystek; Ethan
Barrett and Timothy Belcher; Zoie and Violet Lampman; Robbie and Logan Latus; and Garrett Latus.
Dottie will also be deeply missed by her nephew, Tom Brant and his wife Mendy,; their children Josh
Brant and Meghan and Travis Elkins; and their grandchildren Jack, Lexi, and James Brant and Nathaniel
Elkins.
Dottie had a very successful 30-year career selling real estate in East County. After retiring from real
estate, she and Chuck traveled extensively throughout Europe, Australia, and one of her favorite places:
Hawaii. Dottie was passionate about music, singing, and dancing, and was quite the social butterfly. She
was always planning and hosting parties, outings, and vacations with her friends and family. Since she
had such a caring and loving spirit, everyone loved Dottie. She had an amazing sense of humor and quick
wit, and she always made those around her laugh. People would often describe her as a “hoot!” and so
many people have expressed what a blessing Dottie was to their life.
Dottie was also very active in her community. She served on the Board of Directors for the La Mesa
Kiwaniannes and the Jarrett Meeker Foundation. She drove frequently for Meals on Wheels,
volunteered at the Alzheimer’s Center, and was very active in the Catholic Church.
She was preceded in death by her mother and father, Robert and Helen; her husband of 62 years,
Chuck; and her beloved sister, Phyllis Brant, and her husband Curtis Brant. She will be deeply missed by
all and will remain forever in our hearts.
The family would like to thank the owners, staff, and caregivers at Olivenhain Guest Home for providing
six years of loving care to “Dancing Dottie” in her final years of life.