To share your memory on the wall of Roman Gastelum, sign in using one of the following options:

Provide comfort for the family of Roman Gastelum with a meaningful gesture of sympathy.

Roman Gastelum of Escondido, CA was born in San Diego, CA on December, 15, 1934; and passed away peacefully on October 13, 2019, following a sudden illness.

Roman Gastelum of Escondido, CA was born in San Diego, CA on December, 15, 1934; and passed away peacefully on October 13, 2019, following a sudden illness.

Roman was a master musician and played the guitar beautifully.
His happiness came from spending time with his family, showing love to his grandchildren and teaching his Yaqui heritage to the younger generations in the family.

He will be deeply missed by all who knew his loving and generous spirit. Roman is survived by his children Roman Gastelum Jr., Andrea Carraso, Angelo Gastelum, Valentina Bednarski and Julian Gastelum; his sister Norma MacDonald; many grandchildren and great grand children, as well as many beloved nieces and nephews.

We encourage you to share your most beloved memories of Roman here, so that the family and other loved ones can always see it. You can upload cherished photographs, or share your favorite stories, and can even comment on those shared by others.

Posted Dec 03, 2019 at 11:14am
I knew Roman. He encouraged me in every aspect of my life. We were residents of what he said was a "horse and buggy town." The common thread in our relationship was the art of Jazz guitar, although there were certainly many other threads in our friendship. We didn't always see eye to eye on my things but with most lasting friendships we just let things go. I learned so much about the history of Jazz and boleros from Roman. He had a certain way of playing beautiful music way that just floored me. We always addressed each other as "sai" which means brother in our ancestors' dialect. I met him while we were still very young and he had just started a new family there in Escondido. I hadn't talked with him since 2017 but thought about him often which caused me to google his name and discovered his passing. We'll see you on the other side "chito " and I hope your goat is waiting for you too. Have the guitars ready when I show up to the gig!
Comment Share
Share via:
TR

Posted Oct 21, 2019 at 06:00am
Spending time with you at your home, you sharing stories with us about your childhood, always making us laugh you were a fun Uncle, I will always cherish the memories of My Uncle Roman "Threee Days Tina" You got 50 cent" OH Rosie" I miss you and Love you Uncle Forever & Always.
Comment Share
Share via:
CS

Posted Oct 18, 2019 at 10:24am
Just to sit and talk with you Uncle Roman was so special to me. I had so much respect for you. Your voice and your “Whistle” will stay in my heart.
Comment Share
Share via: 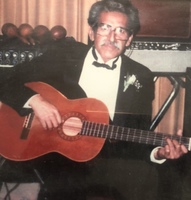