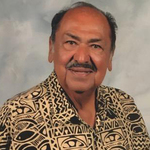 John Turner was born and raised as a native San Diegan. As a toddler he was tossed in the air by his uncle, and when caught was given the nickname “Bingo.” In his early teens he became a third degree brown belt in Judo. He graduated from San Diego High School in 1958 and married his school sweetheart Antonia “Toni” Cervantes in 1959, then having two sons John Jr and Andy.
He attended City College and trained in Electrical Engineering and then worked for various Architectural/Engineering firms until he started his own company in 1980 offering Power and Lighting Design work for Commercial, Industrial and Multifamily Residential Projects. John traveled the world with his wife Toni and retired in 2008, then traveling more. After the passing of his wife, in 2005, he later shared companionship with Alice Lynch with whom he also traveled and enjoyed a variety of adventures with.
He enjoyed watching professional boxing matches, he loved playing racquet ball, camping and horseshoes. John was blessed with many wonderful lifelong friends, both personal and business along with cherished high school classmates in which he attended all his Reunions up until his 60th High School Reunion. He is survived by his two sons and daughter-in-law, 6 grandchildren, and 7 great grandchildren. Near his end he mentioned that he was so fortunate to have been blessed with all the people and memories that gave him a wonderful life.