To share your memory on the wall of Anna Terrazas, sign in using one of the following options:

Anna’s happiest day of her life was when she married the “Love of Her Life” Albert Terrazas whom she dated from 1947 until their marriage in 1953. They were married for almost 63 years until Albert passed in April of 2016.

Anna was a proud graduate of Calexico High School in 1949, always calling herself a “49er”. She helped organize many reunions of their classmates and included surrounding years, as their actual class size was small. She was also instrumental in putting together a “Black & White” Ball at the Hotel De Anza as a fundraiser for the Imperial Valley Museum. One of the most enduring traditions in El Centro that Anna started is the lighting of the “Luminarias” which started on their block of Sandalwood every 23 rd and 24 th of December. It has now become an annual tradition in El Centro and has been enjoyed by many families as a Christmas tradition.

Anna worked for the Calexico Chronicle from 1949 to 1970, covering local social events for the paper. In 1949, the Chronicle was both a stationery store and a newspaper. She then started with the Imperial Valley Press as Social Editor of the Calexico Bureau and wrote a column called “Border Brevities”. Anna was often called in to help with stories such as the Kiki Camarena story among others, using her bilingual capabilities to establish a liaison with newspapers such as La Voz de la Frontera in Mexicali. After 22 years, Anna retired from the IV Press to travel extensively with Albert, who retired from Imperial Savings.

Anna and her twin Maggie were members of the Calexico Women’s Improvement Club and they both spent time on various beautification projects and committees around their hometown. Anna was a co-founder of the Calexico Lioness Club and was on the committee responsible for Lioness Park near Calexico High School. After moving to El Centro in 1974, Anna remained tied to her hometown friends by forming the “Butterfly Bonche” which consisted of Lion’s Club wives. She also lunched regularly with her “Red Hat” girlfriends in El Centro and especially looked forward to participating in the gatherings of the Calexico pioneer group of women that called themselves “The Steel Magnolias”.

Besides the aforementioned, Anna was preceded in death by daughters Clarissa (Rissy) Marrs, a child who died as an infant, Marissa Terrazas and siblings Joe and Frank Mercado and Lupita Velasquez. She is survived by her youngest sibling Dolores (Loli) Torres and daughters Terry (Ron) Asamen and Lisa (Dave) Schmidt, grandchildren Edward Asamen, Andrea (Jimmy Gay) Asamen and Alexis (Josh Caserta) Asamen, David (Virggie) Fowler and Steven Fowler, Shelby Schmidt, Christopher Marrs, Vanessa (Tony) Rhea and Emily (Ed) Gonsalez and her ever-loyal dog Charlie. Anna had 12 great grand-children. Interment will be private due to Covid restrictions and a gathering for friends and family will be held at a later date. In lieu of flowers, Anna requests continued support of the Humane Society of Imperial County and the Sister Evelyn Mourey Center,
two causes dear to her heart.
Read Less

To send flowers to the family or plant a tree in memory of Anna M Terrazas, please visit our Heartfelt Sympathies Store.

Receive notifications about information and event scheduling for Anna

There are no events scheduled. You can still show your support by sending flowers directly to the family, or planting a memorial tree in memory of Anna M Terrazas.
Visit the Heartfelt Sympathies Store

We encourage you to share your most beloved memories of Anna here, so that the family and other loved ones can always see it. You can upload cherished photographs, or share your favorite stories, and can even comment on those shared by others.

Posted Jun 17, 2020 at 12:54am
Anna will be dearly missed. She was so caring and did so much for the community. She is greatly loved. Prayers for all of you. Anna is with the Lord, and He loves her too!

Posted Jun 16, 2020 at 08:21pm
To Terry and family - our heart felt sympathy goes out to you and your family on the passing of your mom. Anna was a truly beautiful lady in every aspect of her life. She was truly a beautiful soul. Anna will be greatly missed by her family and friends.
Sending you love and heart felt condolences at this very sad time. 🙏
Wetta and Michael Loughran
Nampa, Idaho
Comment Share
Share via:
I

Posted Jun 16, 2020 at 02:52pm
Our Deepest Condolences On the passing of your Beautiful Mother Anna She was a beautiful lady inside & Out ..
i met her in 1973 when she wrote my engagement Announcement and then my Wedding Day Article in the Calexico Chronicle. She wrote a lovely Piece and I was Happy to learn that she had Known my Mother and shared from stories of their school days .. After we moved to El Centro I would see her at church always with a big Smile, Hello and hug.. May she rest in Eternal Peace . Prayers for all the Terrazas & Mercado Mercado families ..
God Bless you all : Leo & Irene Bielma & Family.
Comment Share
Share via:
DC

Posted Jun 16, 2020 at 10:40am
Mrs. Terrazas was the BEST classroom grandmother. She started visiting on a regular basis when Vanessa was in 6th grade, sitting with students on the couch to listen to them read or helping Mrs. Abubo and me with art projects and plays. She continued when Emily was in 6th grade, decorating the room and bringing plates and napkins for class parties. Even after that she would come and help sort papers and work with students. She loved to share her journalism career with my class and started bringing Mr. Terrazas as well. They would share stories of their early lives and stress the importance of not only reading, ‘riting, and ‘rithmatic but also respect and responsibility. Those were our 5 R’s! Even later on, Mrs. Terrazas would stop by from time to time with pencils and bookmarks for my students and posters made from calendars for my classroom. When it got harder to come to school, we had lunch a few times and talked on the phone. Anna and Albert were like a second set of parents. I truly cherish my memories of both of them!
Comment Share
Share via: 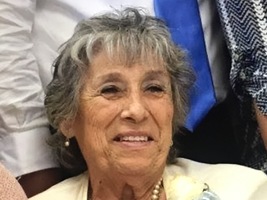 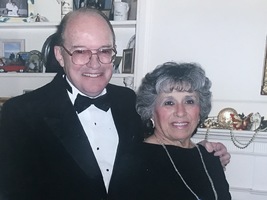 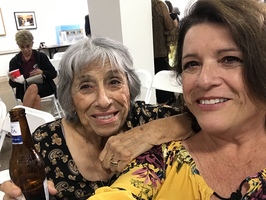 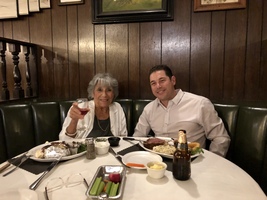