To share your memory on the wall of Herbert Jantz, sign in using one of the following options:

When Herb was only five, his father went to America to try to earn money for sanitarium care for his wife, but she died while he was en route. So Herb grew up largely with his grandparents, working the farm and building his first ladder at twelve! He marched around town with the youth brigades being groomed by the Nazis for the German Army, until his yet-unknown step-mom, Tabea Hans Jantz, sailed to Germany from the U.S. and was able to miraculously get him out of the country “for a visit” just before the war, when Herb was sixteen. Why they let him go will always be a mystery!

He settled in Cleveland, Ohio, with his dad, stepmom, younger brother, Raymond, and later his sister, Dorothy, and some cousins. He struggled to understand and accept what was actually going on in Germany but worked hard to learn English in night-school and eventually voluntarily joined the U.S. Army where he became a U.S. citizen and was stationed in Panama for the duration of WWII. Late in life, Herb discovered that his father had burned all orders for him to report to the German embassy where he would have been returned to fight for Germany. Herb’s life was the result of an amazing story with so many sacrifices. Maybe that is why studying the land of his childhood and the impact Hitler had on the country became a life-long passion.

While Herb was in Panama, his family resettled in Los Angeles, where his little sister proudly showed her Sunday School teacher pictures and told stories of her big brother. Upon returning from the war to California, Herb was soon taken with Dorothy’s teacher, Berta Lillian Mehling, another daughter of German immigrants, and after rethinking his Hitler-era atheism, they were married on November 24,1946. He said that he became a Christian at age ten, but recommitted his life to Christ in 1947, due to the influence of his wife and pastor. Herb and Berta were nearing their 68th anniversary when Berta went to meet Jesus in 2014.

Over the years, Herb was employed as a finish carpenter, even opening his own cabinet shop, and eventually worked in construction for Kaiser Permanente Hospitals in L.A. and San Diego where he became construction supervisor. He was rightly proud of “his hospitals” and would gladly tell you which ones he built or remodeled as you visited or passed by.

During this time, Herb and Berta had three children, Daphnelynn, Debbie and Barry, remodeled three houses in Whittier, California, and even built the house on Broadway for his family in 1959-60.

Since Whittier became home, the family changed from a German Baptist Church in L.A. to Calvary Baptist in Whittier, where Herb sang in the choir, served on the deacon board and installed many cabinets until 1973. At that time, Herb, Berta and son, Barry, moved to La Mesa, where he remodeled another house while doing the same for Kaiser Hospitals and College Avenue Baptist Church. After jumping a bit between San Diego and Whittier, Herb finally retired in La Mesa after working for Kaiser for twenty years. He liked to tell how he knew the name of every worker, doctor and nurse at every hospital he worked on, and this habit endeared him to neighbors, friends and caretakers the rest of his life.

Everywhere Herb went he improved people’s lives with his skillful hands. His children had built- in drawers in their closets, hand-made desks, and even a toboggan with Formica on the slippery side. That was one fast sled!! He later was involved in remodeling his children’s homes and left his nails and sawdust (he called it "clean dirt") at every church he attended. After the Whittier earthquake of 1987, Herb was instrumental in getting the damaged Whittier Area Baptist Fellowship safe for occupancy again. He was still climbing ladders into his 90's, much to the chagrin of his children.

In his last four years, Herb was especially grateful for his companionship with Helen Brush, as well as his many friends and the entire staff at Monte Vista Village who had become family. He loved Saturday hymn sing, happy hour, Bingo, and the holiday celebrations put on by the staff.

He will be remembered not only for the skilled, caring work of his hands, but for his generosity of spirit, kind heartedness, and love for his family and all those he lived among. He will be greatly missed, but is at home now with Jesus, the Master Carpenter.

(Please include a note that says,
“For the ministry of Rick and Debbie Yorgey-106781”)
Read Less

We encourage you to share your most beloved memories of Herbert here, so that the family and other loved ones can always see it. You can upload cherished photographs, or share your favorite stories, and can even comment on those shared by others.

Posted Feb 04, 2020 at 02:28am
Herb had such a pleasant temperament and was always kind and supportive. He was my cousin on my mother's (Jantz) side. I am grateful to have known him, and he will be dearly missed.

Flowers were purchased and a memorial tree planted for the family of Herbert Jantz. 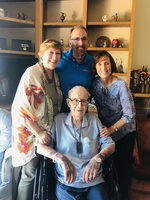