To share your memory on the wall of Maria Feeley, sign in using one of the following options:

While stationed in Guantanamo Bay, Cuba, she completed college English classes then became a Kindergarten teacher, teaching at the base school. In November 1952 their son David was born. After Cuba they were stationed in San Diego, CA briefly until Eddie's retirement in 1956 in which they then moved to South Haven Michigan to work on Eddie's uncle's Blueberry Farm. Maria did not enjoy living in MI, and the family returned to San Diego in the 1960's where David started 1st grade.

During the 60's Maria worked at Walker Scott department store in the drapery section. She loved sewing, making clothes for herself, and shirts for her husband and son. She also worked at Stretch and Sew, and at the local Boy Scouts of America office.

Maria and Edwin celebrated 25 years of marriage in April 1971. Sadly her husband passed away in October that same year. Maria then became a San Diego County employee working as a Clerk until her retirement. She attended Holy Spirit Catholic Church and was an active member of the Altar Society. She served several terms as President of the San Diego Chapter of the Society of Military Widows working on behalf of the "Forgotten Widows" to secure benefits for military widows, including writing monthly newsletters.

She was an amazing grandmother to her granddaughters Amber and Crystal, who often stayed at her house over the weekends. She enjoyed being a very active grandmother, baking cupcakes with them, cook omelettes, and teaching them to sew buttons. She often made them matching nightgowns and slippers. Many years later she became great-grandmother to Jason, Bryana, and Kyleigh, then to Mark and Matthew through Amber's marriage. In her later years she enjoyed going to watch Kyleigh act in plays and swim. Her family celebrated her birthdays with her at Bucca Di Beppo's where she sat at the head of the table in the Pope Room and at the Olive Garden. She loved to garden in her rose garden, to listen to Doris Day, and sing her favorite song "Que Sera Sera".

Maria is very loved by her family and will be deeply missed.
Read Less

To send flowers to the family or plant a tree in memory of Maria G Feeley, please visit our Heartfelt Sympathies Store.

Receive notifications about information and event scheduling for Maria

We encourage you to share your most beloved memories of Maria here, so that the family and other loved ones can always see it. You can upload cherished photographs, or share your favorite stories, and can even comment on those shared by others.

Posted Aug 01, 2020 at 10:26pm
It was always great to see Maria walking the neighborhood and she attended some our Islenair Ladies of the Hood Holiday parties. She will be missed and we know that she was dearly loved in the neighborhood. Our hearts, prayers and thoughts go to David and the Feeley family at this time. Donna and Barry Gillen, 3261 Belle Isle.
Comment Share
Share via: 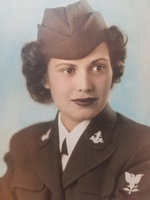