To share your memory on the wall of Phyllis O\'Neill, sign in using one of the following options:

Upon graduation, Phyllis kept house for various families in town and eventually moved to Sioux City, Iowa. While working and attending business college in Sioux City she met her future husband on a blind date – Francis Joseph O’Neill, a native of Alaska. He was stationed at Sioux City Army Air Base. Francis served as a Captain in the Army Air Forces with the 8th Air Force, 388th Bomb Group during World War II in European combat operations. Phyllis relocated to Oak Park, Illinois and accepted a position within the catalog department at Sears Roebuck in Chicago. Upon Francis’ return from the war, he married Phyllis on October 13, 1945 at Ascension Catholic Church in Oak Park, Illinois. Their honeymoon was a sleeper car train trip from Chicago to Seattle and then a steamer ship to Anchorage, Alaska. Phyllis and Francis made their home in Anchorage until moving to Lemon Grove in 1957.

Phyllis was a devout Catholic and proud of her Faith. She served as a Lector at St. John of the Cross Parish for over 25 years. She was a member of Catholic Daughters of the Americas - Court Teresa of Avila #1580 for over 60 years, Ladies of Columbus - Our Lady of Grace Council and St. John of the Cross Womens Club. Phyllis and Francis loved to play pinochle and bowl – they were active members of Court Teresa of Avila’s Pinochle Group and Bowling League. They looked forward to their frequent pinochle parties and weekly bowling. After Phyllis was no longer physically able to bowl, Francis continued to bowl for many years in the league with Phyllis as his enthusiastic spectator!

Phyllis retired from the State of California – Employment Development Department. During her retirement she enjoyed working in her garden – tending her roses, apricot, avocado, lemon, orange, peach and plum trees; raising crops of tomatoes, zucchini, asparagus, boysenberries and grapes. Growing up during the Great Depression, Phyllis learned to be thrifty from a young age. She was an excellent cook and baker. Phyllis possessed the ability to prepare delicious family meals from scratch for her husband and seven children on a tight budget. Each year Phyllis canned her own tomatoes & apricots and made apricot jam & preserves. Phyllis was also known for her delicious fruit pies: apple, apricot and boysenberry as well as baking her famous Turtle Cake and annually baking the O’Neill Family Fruit Cake recipe passed down to Phyllis from her beloved mother-in-law Florence!

Mass of the Resurrection will be at 10:00am on Saturday, November 7 at Holy Cross Chapel, 4470 Hilltop Drive, San Diego with burial immediately following the Mass in Holy Cross Cemetery.

To send flowers to the family or plant a tree in memory of Phyllis Schlesser O'Neill, please visit our Heartfelt Sympathies Store.

Receive notifications about information and event scheduling for Phyllis

We encourage you to share your most beloved memories of Phyllis here, so that the family and other loved ones can always see it. You can upload cherished photographs, or share your favorite stories, and can even comment on those shared by others.

The Jarrin Family and We send our love and hugs... The Arens family sent flowers to the family of Phyllis Schlesser O'Neill.
Show you care by sending flowers

We send our love and hugs... The Arens family

We send our love and hugs... The Arens family purchased the Your Light Shines for the family of Phyllis O'Neill. Send Flowers

Posted Oct 30, 2020 at 11:21am
I will always remember the smell of grandma’s rose garden as we pulled up to her house for Thanksgiving, Christmas or Easter. She would always send us home with chocolate chip cookies that we helped her bake and a big bag full of oranges from their orange tree. I will always cherish my memories with her.
Comment Share
Share via:
CO

My Love and condolences to the family. I remember years a go going over to Francis and Phyllis's house for Thanksgiving and Christmas dinner. Phyllis and Theresa Would be cooking together. Phyllis was an excellent cook. The holiday dinners were so good . I always enjoyed seeing everyone during the holidays.Phyllis was also an excellent seamstress . She made some beautiful outfits. I remember when Francis and Phyllis where planning a trip to Hawaii. Phyllis made a white pantsuit with beautiful buttons down the front of it. She was talented at sewing.. Phyllis always enjoyed a good conversation with everyone. May God surround the family with love at this time. 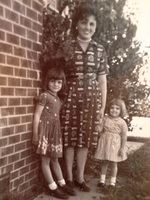 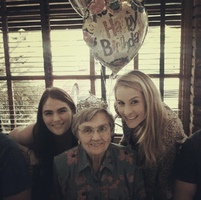 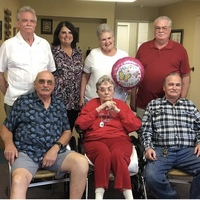