To share your memory on the wall of Richard Kneeshaw, sign in using one of the following options:

Rick is survived by his wife... Read More
Richard “Rick” Kneeshaw, 72, of San Diego, California, peacefully passed into God’s hands surrounded by his family after a short battle with stage 4 pancreatic cancer on February 4, 2020.

Rick was born October 19, 1947 in San Diego, California to Harriet (Marks) and Richard Kneeshaw. He contracted polio at age 3 and received ongoing treatment at Shriners Hospital for Children in Los Angeles. Rick graduated from University of San Diego High School in 1965 and received his bachelor’s degree in Electrical and Mechanical Engineering from Cal Poly University, San Luis Obispo in 1970. Rick worked for Rohr Industries & Litton Automated Systems for 25 years.

Upon returning to San Diego, Rick became active in the San Diego Catholic Alumni Club where he met and married Lenora Schulte of Emery, South Dakota on October 21, 1972. Their daughter Kathy was born in 1974. Rick and Lenora enjoyed traveling through Europe, numerous cross-country trips in their motorhome and cruising the world together.

Rick was an active volunteer in the community and treasured the friendships he made through his involvement. He served as a leader in establishing Good Shepherd Catholic School, as president of the San Diego Post-Polio Survivors Group, school board president at USDHS, board member of the Disability Rights Legal Center and a proud member of the Uni Class of 1965 reunion committee. Rick loved serving as the “unofficial” mayor of his neighborhood, baking bread, woodworking, talking on his ham radio, walking Charlie in the park and watching his grandchildren grow.

In lieu of flowers, please consider making a donation to Shriners Hospital at https://lovetotherescue.org.
Read Less

We encourage you to share your most beloved memories of Richard here, so that the family and other loved ones can always see it. You can upload cherished photographs, or share your favorite stories, and can even comment on those shared by others.

Posted Feb 10, 2020 at 02:45pm
Sent with love and remembrance. Your loving husband and doting father will remain in your hearts forever. We send you thoughts of comfort. 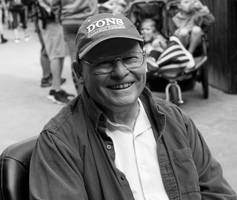