To share your memory on the wall of Richard Phillips, sign in using one of the following options:

Richard L. Phillips “Dick” was born January 20, 1944 in Evansville, Indiana. At approximately 2:00am on August 6, 2020 he was called home to our heavenly father and gained his angel wings.
Read More
HEAVEN IS SHINING A LOT BRIGHTER

Richard L. Phillips “Dick” was born January 20, 1944 in Evansville, Indiana. At approximately 2:00am on August 6, 2020 he was called home to our heavenly father and gained his angel wings.

Dick proudly served 20 years in the United States Navy and retired out as an E6 Tug-Master. He always held the utmost respect for our service men and women. After his military service years he worked a variety of different professions including Captain of the Port for San Diego, a Fuel Technician for Soco Gasoline and Sycuan Casino. At Sycuan he worked as Lieutenant of Security before moving into the casino and becoming the Casino Floor Manager. After 17+ years of working at Sycuan Casino he went to full retirement. It was during his career at Sycuan that he met his wife Therese that he called his “Tootsie Wootsie”.

A beloved husband, father and grand-father, he was a man who could light up any room. With his old sailor personality and dirty jokes he was sure to make anyone smile. His laugh was infectious and his smile was pure. He was a man of Catholic faith and he always stayed true to himself. He did anything for anyone, and found an immense amount of joy and pleasure in doing things for others.

Dick was a giant kid a heart. He loved to shop and had an array of watches and tools that we called his “collector’s items”. In his spare time, he enjoyed sitting back in his chair watching old west movies, anything kung-fu and believe it or not he loved the MTV show Ridiculousness. He enjoyed building large scale model ships which are still proudly displayed in his home. He loved places like Disneyland and SeaWorld and found the most joy taking his children and grand-children and spoiling them while eating a frozen chocolate banana.

Dick will be laid to rest on Monday, August 17, 2020. A formal catholic mass will be held in his honor at Guardian Angels Catholic Church in Santee, California at 11:00am. Following the mass, he will be transported to his final resting place, Miramar National Cemetery where he will be celebrated with full honors.
Read Less

To send flowers to the family or plant a tree in memory of Richard L. Phillips, please visit our Heartfelt Sympathies Store.

Receive notifications about information and event scheduling for Richard

We encourage you to share your most beloved memories of Richard here, so that the family and other loved ones can always see it. You can upload cherished photographs, or share your favorite stories, and can even comment on those shared by others. 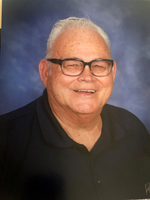