To share your memory on the wall of Thomas McNamara, sign in using one of the following options:

Tom made courtship with Claire Catherine Carr a point of emphasis in his life by meeting her at the train station upon her return home to Pennsylvania from her work as a nurse in New York. In 1951, Tom and Claire married in Wilkes-Barre, PA, and took up residence in Elizabeth, New Jersey, where Tom worked for Prudential Insurance. With the outbreak of the Korean War, he was recalled to active duty in the Navy. Tom returned to work at Prudential Insurance briefly in 1954, but the call of the sea proved to be strong, so he rejoined the active Navy in 1955, truly beginning a long, fulfilling professional career as a Surface Warfare Officer traveling the world.

Tom’s family life with Claire catapulted from zero to six children (Sharon, Bill, Dan, Joe, Tom and Robert) in a span of eight years while his career steadily progressed through challenging assignments. He applied the deep understanding of navigation and seamanship gained at the Merchant Marine Academy in trusted positions as a navigator, officer of the deck and eventually command. He began his seagoing career on the West Coast in the 1950s in a transport ship, USS MONTROSE (APA 221), then a minesweeper, USS ENERGY (MSO 436). Tom transitioned to the destroyer force as operations officer in USS FLOYD B PARKS (DD 884) once senior officers recognized his acumen as a mariner, operational savvy and practical knowledge of naval history. He continued service in the destroyer forces in the 1960s as Executive Officer in USS JOHN PAUL JONES (DD 932) and enjoyed his many reunions with his “JPJ” shipmates through the years. He was grateful for the support from the modern USS JOHN PAUL JONES hosting events for “grey beards” living into their 80s. Tom also had two tours at the Naval War College in Newport, Rhode Island: first as a student, then as Flag Aide to the President of the War College, where he enjoyed shore duty and insightful conversations with WWII naval heroes such as Admiral Raymond Spruance – while smoking cigars and sipping whiskey. Not surprisingly, his seventh child (Patrick) was born in 1965.

Those war college conversations served as the final preparation for arduous command tours in combat during the Vietnam War while Claire kept the crew at home in order. Those experiences as commanding officer in USS ROBISON (DDG 12) in the late ’60s and USS CHICAGO (CG 11) in the early ’70s profoundly shaped his perspective on service to God, country and family bounded by his Catholic faith. Reflections on the stress of combat and prayerful concern for his family often bubbled to the surface in conversations, even in the last two weeks of his life. He recently recounted in vivid detail the smooth sea and sky in 1967 as he conferred with ROBISON watchstanders, predicted attack from shore batteries off the coast of Vietnam, and cleared the bridge of all watchstanders save one officer, the helmsman and the quartermaster of the watch in order to save lives should they get hit. He was proud of the watch teams’ professional response to his silent hand signals for maneuver as shells whistled through the stacks and splashed on the far side of the ship as ROBISON fired counter batteries at flank bell. When asked about prayer, he admitted that he prayed that his life be taken before any crewmember in combat. In 1972 Tom returned to the war in command of USS CHICAGO. Pressed into service providing air coverage over the Gulf of Tonkin, CHICAGO achieved unprecedented success engaging enemy MIG aircraft with the ship’s missiles and controlling U.S. fighter aircraft, one of which was the first fighter aircrew to achieve flying ace status in the Vietnam War. CHICAGO earned many unit (whole ship) awards for excellence in combat, but it was the personal award earned by his crew, especially his own trusted senior enlisted air controller, appropriately nicknamed “Ace” as well, that put a smile on Tom’s face. He was overwhelming proud of the way the officers and men in ROBISON and CHICAGO carried themselves and performed in trying times. Tom was subsequently promoted to Rear Admiral while serving in Hawaii, far from his Pennsylvania mining town roots. Retiring from the Navy in 1977 after his final tour as Commandant of the Ninth Naval District in Great Lakes, Illinois, Tom enjoyed a brief stretch of leisure before being lured to Cubic Corporation in 1980.

His second retirement in 1990 was the start of the next phase of his life in which he enjoyed volunteer work, contributing his knowledge and expertise whenever the opportunity presented itself, often elevating casual conversations to informative exchanges. He became a long-term member of the St. Therese Church Parish Council and Finance Committee and was inducted into the Knights and Ladies of the Holy Sepulchre, with his wife Claire in the early 80s, serving in leadership and organizational capacities over the next three decades, including regional Chancellor. He also served as a volunteer on the Juvenile Justice Commission and served a one-year term on the San Diego County Grand Jury as foreman.

Retirement also offered time to play golf, teeing up early Saturday mornings at Admiral Baker Golf Course. That steady foursome, with a son or two subbing from time to time, shared the best of friendship and respect for decades, going light on golf, but sometimes carrying a bag heavy with life experiences, always punctuated by spirited conversation, humor and fits of laughter. He wished others could experience such dear friendships so deep in life’s voyage. The wanderlust did not end as Tom and Claire traveled with the Knights and Ladies to Israel, Great Britain and Hawaii, cruising through the Panama Canal and Alaskan waters, and visiting his children who began families and lived scattered throughout the states. San Diego sports teams had a devoted fan as a season ticket holder for the Padres and Chargers, the latter of whom spoiled his definition of loyalty. He loved sharing those games with Claire, his children and eventually his grandchildren. As an amateur singer and thespian in his youth, attending the symphony and opera brought him great delight and the University of the Third Age at the University of San Diego provided his lifelong search for knowledge with new learning and experience.

Tom lived his life with integrity, fortitude, resilience, determination, devotion to his family, -- wife, children and grandchildren -- and dedication to the practices and fullness of faith expressed in the Catholic Church. His achievements as a U.S. naval officer in the guidance of his crews and protection of his fellow military were a source of great pride and many sea stories. A pursuer of knowledge, appreciator of excellence, careful maintainer of order, perpetual officer of the deck and hound of the sea, each dawn for him brought “another day in which to excel.” His presence lives on through his family: wife Claire, seven children Sharon (Laurence Andres), William, Daniel (Kathy Jo), Joseph (Debra), Thomas (Tracey), Robert (Debra), and Patrick (Amy), and 21 grandchildren.
Read Less

To send flowers to the family or plant a tree in memory of Thomas William McNamara, please visit our Heartfelt Sympathies Store.

Receive notifications about information and event scheduling for Thomas

We encourage you to share your most beloved memories of Thomas here, so that the family and other loved ones can always see it. You can upload cherished photographs, or share your favorite stories, and can even comment on those shared by others.

The Kaveney Family sent flowers to the family of Thomas William McNamara.
Show you care by sending flowers

Flowers were purchased for the family of Thomas McNamara. Send Flowers

Flowers were purchased for the family of Thomas McNamara. Send Flowers

The Kaveney Family purchased flowers and planted a memorial tree for the family of Thomas McNamara. Send Flowers

Posted Feb 04, 2020 at 12:56pm
My name is Jerry Dalrymple OS3 USN 1969-73. I PROUDLY SERVED ON The USS Chicago CG11 When then Captain McNamara was our Skipper. I worked in CIC with Commander William Biggert and Now Senior Chief Petty Officer Larry Howell. I stood many My name is Jerry Dalrymple and I had the honor to Serve on The USS Chicago under Captain McNamera. I was assigned to CIC under Commander William Biggert and Senior Senior Chief Larry Nowell. I spent many bridge watches with Captain McNanera and it was there I gained much respect for him. I was fortunate to be able to reunite with now Admiral McNamera and Senior Chief Nowell two years ago in Pensacola for a Chicago Reunion. I was gratified to be able to tell him how much I respected him. I told him that I always felt safe on his ship and he got a tear in his eye. I did always feel safe because of his leadership. I am sorry for you family's and our country's loss and I and my family will keep ya'll in our prayers.
Sincerely, Robert G. (Jerry) Dalrymple OS3 USS Chicago CG11 1971-72
Sinserly, ROBERT G. (Jerry) Dalrymple OS-3 USN
Comment Share
Share via:
HS

Flowers were purchased and a memorial tree planted for the family of Thomas McNamara. Send Flowers 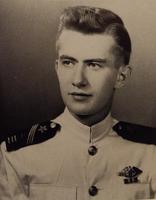 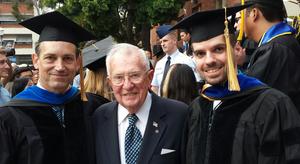 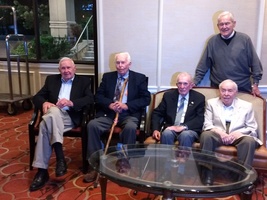