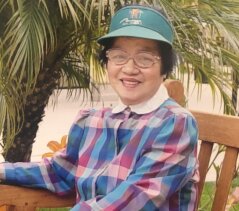 Copy the text below and then paste that into your favorite email application.

Leticia Dizon Wells, born July 1, 1932 passed away at age 88 peacefully with God and family at
her side on Thursday, March 18, 2021 in her home of San Diego, California.
Leticia was born to Maximo Dizon and Atanacia Estrella in Lubao, Pampanga, Philippines. She
grew up in a very poor neighborhood near the river. Her father worked long hard days as a
fisherman, sold fish in the markets and also worked on their rice plantation. Her mother took
care of her ten children at home, doing all the cooking, cleaning and shopping. Her father’s
friends helped him build their bamboo house. As a young girl, Leticia would carry a basket of
food on her head out to her father and friends working in the rice field. She was raised as a
devout Catholic and attended church at the small chapel across the street every day. In Lubao
during World War II and the Bataan Death March, neighbors protected one another during these
dangerous times to help each other survive. There were times when her mother could only give
each of her siblings one tablespoon of rice as a meal, these were the hardest times she had to
live through during her childhood.
Leticia married Charles Wells in 1956. Charles was stationed in the Philippines while serving in
the Navy and often visited a particular restaurant to see his favorite waitress, Leticia. They fell in
love and had their son, Johnny, in 1956 and had their daughter, Shirley, in 1957. She was very
proud of her children for always working hard, for understanding how fortunate they were and
for always looking after their mother and father.
Her humble life centered around family values, hard work and gratitude.  In Guam, she was a
babysitter. She really knew how to care for not just her own family, but for so many others. As a
military family, they moved often, living in Guam, Texas, Maine and California. She worked at
the Naval Base San Diego Galley, utilizing her amazing cooking skills.
She loved to read the Bible, books and newspapers. She enjoyed receiving beautiful cards from
family and friends. Her Catholic faith was strong and she prayed from her altar at home for the
sick, for good health, for safety and blessed those that have passed. She attended morning
mass at Good Shepherd Catholic Church down the street. She had many good, long-time
friends because friends rely and help one another in both good times and hard times. Hospitality
was part of her nature, if you arrived at her house, she always offered to cook you something to
eat and handed you a Diet Coke.  She loved to hold and kiss her great grandbabies, they made
her laugh and smile.  She loved surrounding herself with many of her family’s photos. She
always made sure to ask someone to “take a picture” so that the memory could be added to her
collection of everlasting memories.
She was very intuitive and could read souls with just a single gaze. Her sense of humor was
infectious, she was usually the first to laugh. There weren’t many secrets kept from her, she had
a way of knowing what everyone was up to. She couldn’t be fooled and was quite dubious in
nature.
Her brothers and sisters lived the remainder of their lives in Lubao. She is survived by her
husband Charles; her son Johnny, his wife Paula and his three daughters (Cara, Jenna, Leah);
her daughter Shirley and her three daughters (Leticia, Brandi, Valerie); and seven great -
grandchildren (Javier, Tyler, Santiago, LJ, Benicio, Noemi and Roman). Leticia spent her life
saving money so she could send Balikbayan boxes to her family in the Philippines. She never
forgot her roots, her home, her family and how it felt to grow up without very much. As the only
descendent of her family that moved to the United States, she paid homage to her family by
teaching each generation to be thankful for what they have and to always give to those in need.

Leticia was a daughter, sister, wife, mama, lola, great lola, grandma, great grandma and friend.
“Utang na loob” means “you give to me and I give back to you”. Leticia gave her entire life to
family, and now her family will forever give tribute to her life and her legacy.
To order memorial trees or send flowers to the family in memory of Leticia Dizon Wells, please visit our flower store.